The Book of Sonatas for Viols

The complete series of my viol sonatas will be performed in a concert along with interludes composed specifically for the event by composers Bálint Horváth, Máté Balogh, Csanád Kedves, Péter Tornyai and Lőrinc Szécsi. For the first time, the sonatas will be played in their original version for viols by Nóra Kallai, Júlia Regős and Réka Nagy.

I will return to the concert life with two premieres. My 2016 woodwind trio Heat and my brand new trio St Kilda Variations will be performed by an outstanding group of musicians, Béla Horváth (oboe), Csaba Klenyán (clarinet, bass clarinet), Ramóna Tóth (bassoon), and András Németh (piano). The latter was supposed to be programmed for a concert in March, but it was not even completed by then, as with all the dramatic twists, cancellations, and generally with the life coming to a halt, deadlines just became absolutely meaningless. From then, writing the piece was like writing a kind of a quarantine diary. Not many of my music do reflect with such transparency to how I live, how I cope, how I observe and how I long for things; and although this one too has a more abstract layer, I would have elaborated it in a very different way before the “great isolation”.

Besides my pieces, the concert features works by composers Csanád Kedves and Tamás Matkó. Details of the event: https://bmc.hu/programok/talalkozasok-kedves-csanad-matko-tamas-es-szigeti-mate-szerzoi-estje

Due to temporary public health regulations, the concerts featuring my pieces have been postponed to dates yet to be confirmed. Although it is more than likely that the public events are suspended until the end of summer 2020, watch this space for updates on premieres of new works including a set of pieces for violin and harpsichord entitled 5 Sad Ayres from South of England, and St. Kilda Variations for oboe, clarinet and piano. Take care of yourselves, and keep in touch!

As a kind of an encore after an exciting period full of concerts, my piece Canciones excéntricas for three singers and a pianist will be performed again in a concert given by DLA candidates of the Liszt Ferenc Academy of Music, Budapest. Singers: Edina Békefi, Andrea Brassói-Jőrös, Nóra Tatai. Piano: Ferenc János Szabó.

An extraordinary selecition of pieces to celebrate an extraordinary scholar, András Wilheim. My piece Elude originally written for the Erik Satie-anniversary in 2016 will be played by Máté Bán (flute), Csaba Klenyán (clarinet), Péter Tornyai (viola) and Tamás Zétényi (cello).

Parallel Canones – Concert Tour in Transylvania with composer-performers of CentriFUGA

Composers and performers will get together to celebrate the decade-long existence FUGA Budapest Center of Architecture, a unique and prolific platform of contemporary art.

A piece of mine based on a poem by St Teresa of Ávila and written for three female voices and piano will be performed twice in September: first in Pécs, later in Budapest. Singers: Edina Békefi, Andrea Brassói-Jőrös, Nóra Tatai. Piano: Ferenc János Szabó. 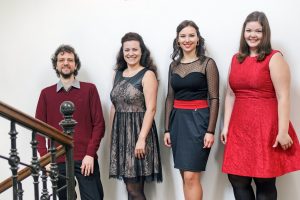 Easter Lines is a piece for an ensemble of unlimited number of recorders, which was written as an outcome of a join project with visual artist Anna Peternák. The piece will be premiered in the opening concert for the exhibition ‘Passageway’ featuring works by members of Hermina Artist Collective. Recorder players: János Bali, Balázs Bánfi, Júlia Kaposi, Máté Szigeti, Éva Valóczki-Bánfi. Visitors can watch the video recording of the piece between 11th September and 4th October, weekdays from 10am to 6pm. 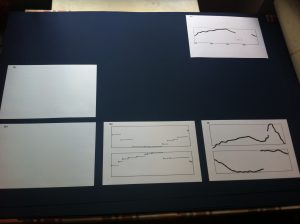 String players currently studying in my hometown Szeged, premiered a piece from my Book of Sonatas for Viols.  The string trio version of Segunda sonata was played by Kleopátra Tulpán, Gergely Kálmán and Dóra Károlyi on 13th March, in the final concert of the Second Festival of Young Composers, Szeged.

An extraordinary programme featuring pieces for gamelan and other kinds of percussive instruments, objects, piano and electronics written by composers of centriFUGA. As part of the concert, my piece Colonial Times – 19 Small Islands near West Java will be premiered by the members of Surya Kencana A, János Nevelő, Dzsanda Vitalij, András Térfy, and myself. The concert is an event of Transparent Sound New Music Festival.

The Classicus Quartet has launched an epic series of concerts: each event of their project features pieces based on one particular note of the chromatic scale from C to B. The twelve-part series will be extended by 4 more ‘intermezzo-concerts’. (See more details in the webpage of Classicus Ensemble).  My piece Second Movement (Beethoven) which is also part of my work Late Quartet will be played in the second concert, along with string quartets by Mozart, Schubert and Shostakovitch, all based on the note ‘C’.

A neo-baroque cantata based on a speech by MP Zoltán Balog. The text is about culture, funding, healthcare, education, and lamb stewing.  The piece will be performed twice in the same week.

As part of the inaugural concert of our new-music ensemble Ensemble Out-Take,  two pieces of mine will be played at a local pub in Southampton. A rare occasion to enjoy beverages and experimental music at the same time. Other featured composers are Laurence Crane, Christian Wolff, Millie Aldridge, and Christian Drew. 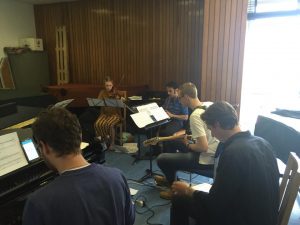 I will be attending some of the concerts of the fantastic Canadian string quartet on their European tour, including the Hungarian premier of Gyula Csapó’s Déja? Kojá?, and a lecture-recital in Aberdeen. I will also have the opportunity to work on my recent piece Late Quartet with the musicians on a public workshop. The piece is a representative conclusion of my research on musical borrowing.

Mylied, a piece of mine for piano solo will be premiered by György Klebniczki on a concert featuring composers related to my birth town.

Not long after its premier, my piece Liederbuch is on concert again, this time with brand new people and venue. The programme offers an extremely diverse selection of pieces from renaissance songs to electronic improvisation. Liederbuch is going to be played by Dávid Kanyó (alto flute), Ábel Fazekas (bass clarinet), Beáta Móri (cimbalom), and Zsolt Sági (gitár). 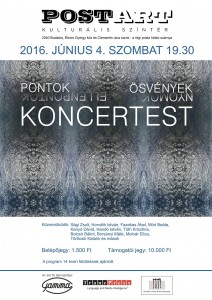 My piece Elude (a truncated Satie-prelude) will be played by Ensemble Dissous on a concert celebrating Satie’s 150th birthday in Edinburgh.

Summary about the past 12 months

Since I have not updated the News for a year, instead of advertising future concerts, I am going to write an annual report about the most important events of 2015.

On 21st June, we were celebrating Gyula Csapó on his 60th birthday. Although I was unable to attend the concert in Budapest, I had written a piece (Liederbuch) especially for the event.  (Details)

After I got back from Scotland, I had the good fortune to work with Norwegian percussionist Håkon Stene, on my piece, Niemandsland for vibraphone and objects, on a workshop at Turner Sims Hall, Southampton featuring other composers from the Department. The series of workshops ended with the ensemble Plus Minus this year. My recent piece In the Lovers’ Orchard written for 3-6 freely chosen instruments and piano, was played on clarinet, violin, electric guitar, and piano on the workshop held at Turner Sims Hall on 2nd November. 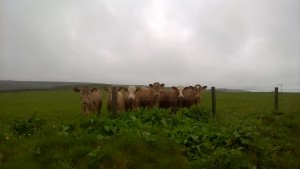 An eventful weekend with talks, public rehearsals, a composition workshop, and most of all: the UK premiere of Michael Finnissy’s large-scale work Remembrance Day for soloists, choir and orchestra. On Saturday morning, the Exaudi vocal ensemble will be performing pieces written by Southampton composers. Among these, my piece Place me on Sunium’s marbled steep is going to be sung.

Full programme for the weekend here. 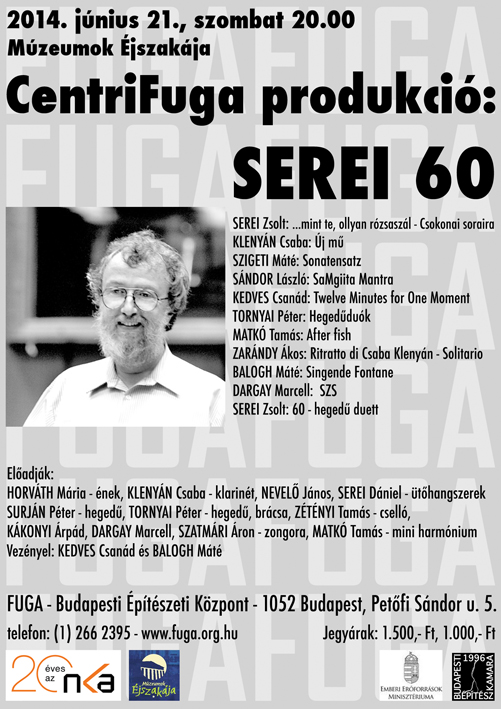 I can’t wait to hear Nap. Futás being premiered in Brussels, along with pieces by fellow students Alex Glyde-Bates and Ben Jameson.

Pieces on the matter of durations. A Feldman-opus from 1961 (Durations III) in the centre of the programme.

Event of the year: the members of The DeClassified (info) premiered my clarinet quintet entitled Topographical Poetry on a concert of the festival held in Iceland. Besides two other pieces were played in the same programme by composers Ellis Ludwig-Leone and Árni Freyr Gunnarsson.  The recording of my piece will soon be available here.

Concert with my colleagues’ participation

Me and Valéria Szilágyi are going to play my piece for two pianos written in 2006. Hungarian premiere!

After the 2012 premiere my THReNSeMBle Piece will be played again! 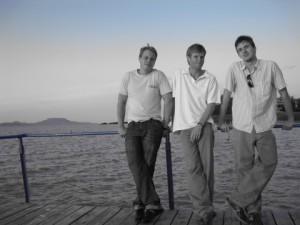 My piece Trio (5), first performed on Bartók Festival, Szombathely in 2011, will be played second time in this concert.
Detailed programme can be found here.

My stringtrio, Sonatensatz will be played on this event. 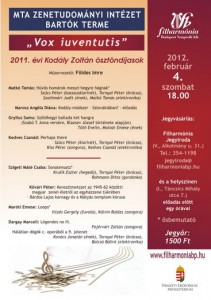 My piece, Fall (for clarinet solo) will be premiered on this concert. 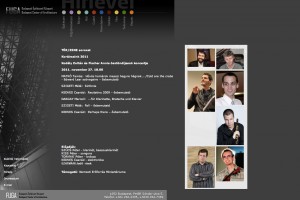 Among many composers’ duos for harp and percussion, my piece for Duo Harpverk will be performed by Katie Buckley and Frank Aarnink.